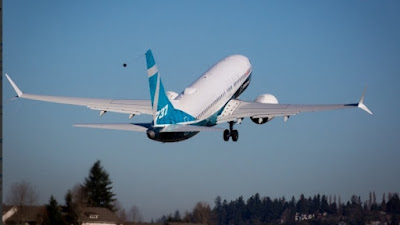 Boeing test pilots completed a 3-hour, 10 min. first flight of the 737-7, the third and smallest member of the 737 MAX family, when the aircraft landed at Boeing Field, Seattle, on March 16.

Boeing is scheduled to spend the bulk of this year completing the flight test and certification program before delivering the initial 737-7 in 2019.

However, the company is banking on positive performance results from the test campaign to help stimulate further orders for the variant. While overall sales of the MAX now exceed 4,300, the diminutive 737-7 is believed to have attracted less than 100 orders, lagging behind its siblings as operators continue to “up-gauge” to larger aircraft.

Despite a redesign of the -7 in 2016 at the request of launch customer Southwest Airlines and Canada’s WestJet, which added range and an extra 12 passenger seats, Boeing until now has acknowledged only around 60 firm orders for the variant, which seats 138 in a typical two-class configuration. However, Boeing believes the aircraft’s range capability of 3,850 nm, the greatest of any MAX version, could make it attractive for airlines looking to open new point-to-point routes in much the same way as the 787.

The second 737-7, which is scheduled to join the program in coming weeks, is set to conduct “hot and high” temperature and altitude takeoff tests in China where Boeing anticipates additional demand for the aircraft will emerge.

Piloted for its maiden flight by Boeing test and evaluation captains Jim Webb and Keith Otsuka, the aircraft departed Renton, site of Boeing’s 737 production line, at 10.17 am and climbed to 25,000 ft. and 250 kt. while heading west to pass over the Olympic Peninsula before flying back over Seattle on its way to eastern Washington. The crew continued to conduct handling tests while descending to 15,000 ft. before flying a missed approach to Boeing’s Moses Lake test site. The aircraft was then flown to the Mount Rainier area where Boeing took the opportunity to capture some air-to-air photographs before landing at Boeing Field, Seattle.

Boeing says aerodynamic and propulsion improvements developed for the MAX 7 enable it to fly 1,000 nm farther and carry more passengers than its predecessor, the 737-700, while having 18% lower fuel costs per seat. As a result, the company said the MAX 7 has the advantage over its nearest rival, the Airbus A319neo. The aircraft, it said, carries 12 more passengers 400 nm farther than the smaller Airbus and with “7% lower operating costs per seat.”

Other close rivals in the tightly contested 130-seat sector include Bombardier’s stretched CS300 and the Embraer E195-E2.