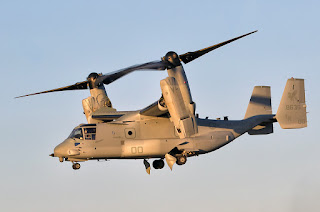 Cobham announced a contract from the Bell-Boeing Joint Program Office to develop a palletized aerial refueling system for U.S. Marine Corps’ MV-22B Ospreys. The Marines will use the tiltrotor to extend the operational range and loiter times of the F-35B Lightning II and F/A-18 Hornet.

The roll-on, roll-off V-22 Aerial Refueling System (VARS) will use Cobham’s existing FR300 Hose Drum Unit with some modifications. The FR300, mounted in centerline configuration, extends and retracts a refueling hose to supply probe-equipped receiver aircraft. It is installed in most C-130 wing-mounted pods, according to Cobham.

The Pentagon announced a $58.7 million Naval Air Systems Command (Navair) award to Bell-Boeing to develop and integrate the refueling system on the MV-22B in late May. Cobham announced its contract from Bell-Boeing on October 25. Cobham’s Mission Systems facility in Davenport, Iowa, will design and produce the VARS, with deliveries to start in 2018.

Aerial refueling is one way the MV-22 will support the F-35B; in May 2015, the Marines demonstrated the tiltrotor’s ability to transport the fighter’s F135 engine power module from shore to ship during operational tests on the amphibious assault ship USS Wasp. The service envisions the MV-22 supporting shipboard engine repairs for both the F-35B and U.S. Navy F-35Cs.

Bell-Boeing is also developing a new CMV-22B version of the tiltrotor for the Navy, to replace the Northrop Grumman C-2 Greyhound turboprop in the carrier on-board delivery role. On March 31, Navair awarded the partnership a $151 million contract to design the required modifications to the baseline MV-22: range-extension fuel tanks, a high frequency beyond line-of-sight radio capability and a public address system.

(Bill Carey - AINOnline News)
Posted by Michael Carter at 12:08 AM