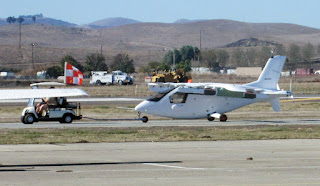 This is one of the first photos of what is believed to be a “flying car” funded by Google co-founder Larry Page. The mysterious aircraft was spotted at the Hollister Airport, where Page’s startup Zee.Aero has a hangar. Witnesses said they saw the aircraft hovering on two occasions before it returned to earth and was towed back to Zee.Aero’s facility. The aircraft has been described as a flying car because it can take off and land vertically, and Zee.Aero’s patent shows an aircraft parked like a car in a typical lot. This photograph was taken by Steve Eggleston, who works at DK Turbines next to the airport tarmac.