Boeing may be building a new commercial passenger plane that can take off and land vertically, according to a patent awarded to the company on Tuesday.
The aircraft features two tilt-rotors on each wing that can rotate to a vertical or horizontal orientation, depending on the circumstances. Vertical would be used for takeoff and landing, much like a helicopter, and then once it is in flight, the rotors can be switched to horizontal so it can be flown like a normal airplane. 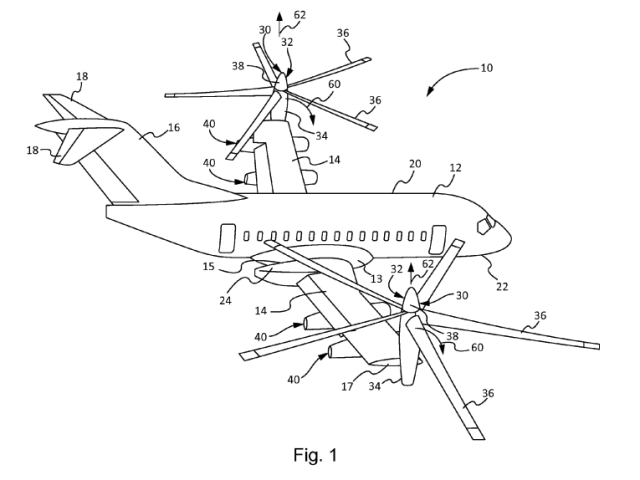 (US Patent and Trademark Office)

Known as a vertical takeoff and landing (VTOL) aircraft, it allows much more flexibility and longer range than a traditional helicopter may provide. The military has been using a VTOL aircraft known as the V-22 Osprey since 2007. That aircraft was built by Boeing and Bell.

Bell used its experience on the V-22 to develop its own civilian VTOL aircraft, called the BA609. Its partner AgustaWestland took over ownership of the project in 2011 and developed a prototype, though it can only carry nine people.

The new Boeing patent says the plane can carry at least 100 passengers as a regional commercial plane, be reconfigured for military use, or it can be used as a personal aircraft. While the military V-22 is powered by two Rolls Royce engines, the civilian version would be powered by four engines, each coupled to the aircraft's wings. 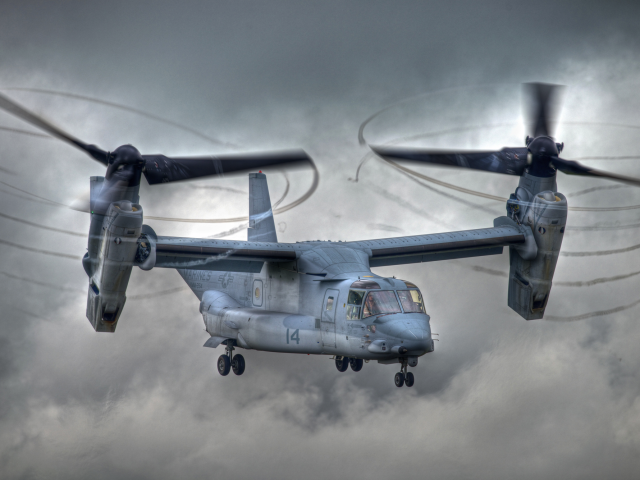 There are other noticeable differences to that of the V-22: The wings are much lower on the fuselage in the civilian patent images, and the aircraft's tail assembly is a traditional t-shape, instead of having the V-22's twin tailfin design.

The military's V-22 can carry 24 troops comfortably up to an altitude of 25,000 feet, and has a cruising speed of 277 mph. Boeing does not give those specifics in this latest patent.

As is usually the case with patent filings, there is a good chance this is something that could remain on the drawing board and never actually be built. Boeing first filed the patent in June 2014.

"Boeing files tons of patents so this might not even come to fruition," said Tom Kim, a spokesperson for Boeing. "I'm not saying it won't," he added, though he was unaware of the patent in question and said he would look into it. 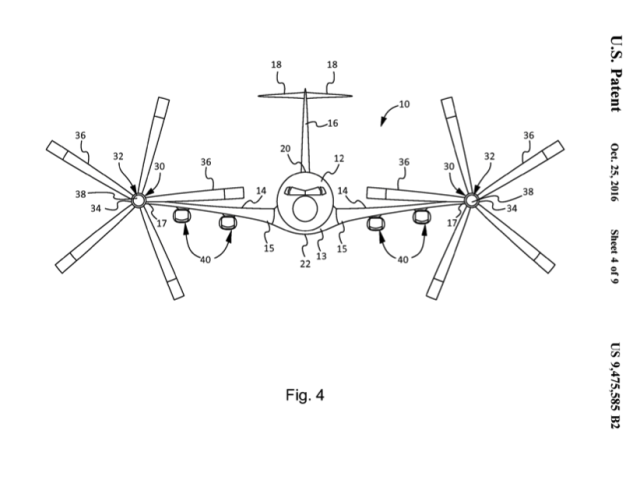 (US Patent and Trademark Office)