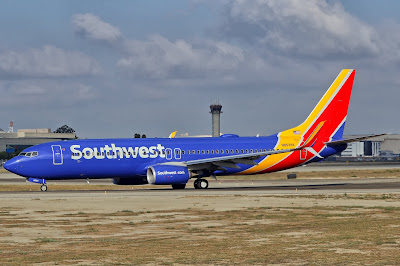 Southwest’s third-quarter operation faced weather-related disruptions that forced it cancel more than 2,200 flights, primarily in the Denver, Baltimore/Washington DC and the Southeast US. That led it to cut its Q3 ASM growth forecast to 3.5%-4%, down from 4.5%-5%. It ended near the top of its guidance, at 3.9%, while RPMs rose 2.7%

Momentum generated during a strong first quarter (Q1) was interrupted by the April 17 inflight engine failure that left one passenger dead. Southwest suspended its marketing after the accident and reported a short-term decline in bookings, which helped contribute to a rare YOY decline in monthly RPMs.

The airline has also struggled to optimize its schedule and grow as planned following last year’s fast-tracking of Boeing 737 Classic retirements ahead of taking delivery of its first 737 MAX-family aircraft. Southwest ended the first quarter with a fleet of 717s, compared to 727 in the year-earlier period and 735 at the mid-point of 2017, just before the bulk of the Classic retirements. Even with fewer aircraft, first-quarter capacity grew 1.8%, because in part of the addition of early-morning and late-evening flights. Aviation Week Fleet Discovery shows the fleet count is now at 739, including 20 737-8s.

Speaking on the carrier’s second-quarter earnings call in July, Southwest CEO Gary Kelly said the accident-related headwinds had subsided, in part thanks to a rare summer fare sale. Fleet growth was helping with schedule optimization, with steady improvement expected through the third quarter as demand ramped up from the in-between, or shoulder, demand season to the summer peak season.

“[Our] flight schedule in Q3 is still somewhat sub-optimal, but the headwinds begin to subside in August as a percentage of shoulder flying begins to decrease as we overcome our fleet deficit,” Kelly explained. “The schedule impact in Q3 improved sequentially from Q2, but it’s still about a 0.5-point drag on Q3 RASM. And this penalty should subside wholly by Q4.”

While the fleet-related schedule issues could explain the weak third-quarter figures, they also may point to some larger issues, Delta Airport Consultants chief industry strategist Bill Swelbar said. The continued maturation of the US market makes finding new opportunities more challenging for everyone, he stressed.

Southwest’s Kelly acknowledged that market maturation in the current environment takes time, and the carrier prefers practicing patience over constantly shuffling its network in search of short-term winners.

“We have startup markets that sometimes will take several years before they reach the kind of maturity that we're satisfied with,” Kelly noted. “But I’ll tell you this, once we decide to put Southwest in a market, we are loathe to pull out. We have the overall cost structure and operating margins and balance sheet to be patient.”

Meanwhile, airlines continue to develop more sophisticated fare and product segments, giving them more flexibility to compete against lower-cost operators without completely wiping out their margins. While Southwest is now among the carriers with more advanced segmentation capabilities thanks largely to a new reservations system, it is merely catching up with most of its peers.

“The competition is smarter, whether it be the ULCCs or even the network carriers segmenting their product offerings and not ceding traffic to LCCs as they have in the past,” Swelbar noted.

Despite the capacity/traffic imbalance, Southwest has expressed confidence in its RASM outlook. A Sept. 12 investor update highlighted “continued passenger revenue momentum during third quarter 2018 with solid bookings and strength in close-in yield trends.” The carrier in late August changed its early-check-in fee structure, adding higher-priced options. It expects to generate $70-$80 million in Q3 pre-tax revenue from the move.