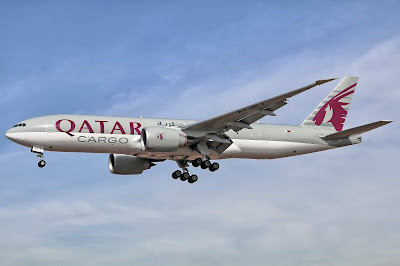 Macau is the airline’s fourth freighter destination in Greater China, with the 2X-weekly services to the southern Chinese city acting as a hopping-off point across the Pacific. The service will be operated by a Boeing 777F.

China and the Americas are key markets for Qatar Airways Cargo, with many of the major industrial and manufacturing centers in the Guangdong province of China located on the Macau side of the Pearl River Delta. Electronics, garments and e-commerce goods are major exports from Macau, while imports into the former Portuguese colony consist primarily of consumer goods.

“We have launched our newest freighter destination, Macau, just in time for the holiday season when air freight demand is high and the market is strong,” Qatar Airways chief officer cargo Guillaume Halleux said. The airline said its cargo arm is now the second-largest dedicated freighter company in the world.

“The new services will connect manufacturing industries and exporters from the region to North America directly and quickly, without requiring a stopover at our hub in Doha,” Halleux added.

In North America, the carrier has a network of nine freighter destinations and 11 belly-hold cargo destinations.

From Macau, the new service operates to Los Angeles and Mexico City. On the return leg, the freighter flies over the Atlantic to Liege, Belgium, before arriving at the carrier’s hub in Doha. One hundred tonnes of cargo capacity is offered on each flight leg.

Appriciable article, We at Property Hunters shifted this service to a level much higher than the broker concept. you can see more details like this article Property in pearl qatar