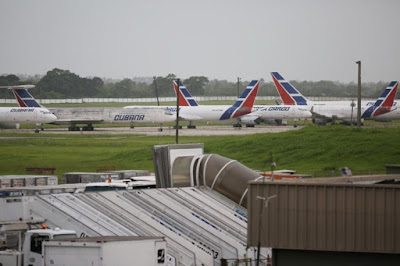 In the busy summer travel period in Cuba, a long line of people wait for hours in the sweltering heat outside the Havana office of state-owned airline Cubana, many of them eager to visit families in the provinces.

But they are not waiting to book flights. Instead, they hope to get their money back on plane tickets or exchange them for bus tickets across the island.

Cubana, which has a virtual monopoly on domestic flights, has suspended nearly all of them due to a lack of working aircraft, plunging travel on the Caribbean's largest island into chaos and highlighting problems at what was once a vanguard of Latin American aviation.

The flight suspensions were made a month after a Cubana flight crashed after takeoff from Havana airport in May, killing 112 people. They come at a time when Communist-run Cuba is trying to stimulate tourism, one of the few bright spots in its economy, by promoting beach resorts and colonial towns hundreds of kilometers (miles) from the capital.

"Now I will have to take a 16-hour bus-ride to Guantanamo but what other options do I have?," said kindergarten teacher Marlene Mendoza, who was bathed in sweat and got a bus ticket to eastern Cuba after queuing for more than seven hours.

Cubana did not reply to requests for comment for this story.Founded in 1929 as one of Latin America's first airlines, Cubana was nationalized after Fidel Castro's leftist 1959 revolution. In its heyday, it flew Cuban troops to Africa and passengers to allied socialist countries around the globe.

For decades it got around U.S. sanctions that restricted it from buying planes with a certain share of U.S. components - including European Airbus and Brazilian Embraers - by acquiring first Soviet and then Russian aircraft.

The carrier maintained a decent safety record but its reputation for mediocre service and delays prompted many foreign tourists to use mostly land transport. Then, over the past year, it started canceling more flights than usual, often putting passengers up in hotels for days, without commenting publicly on the disarray.After the Boeing 737 crashed on May 18, Cubana said it had leased the plane from Mexican company Damojh due to a lack of its own aircraft. A second Damojh plane has been grounded pending a safety audit of its fleet by Mexican authorities, data from Flightradar24 shows, aggravating the shortage.

Cuban, Mexican and U.S. authorities are still investigating the crash and have not commented on possible causes. Damojh has said in a press release that is fully cooperating with those investigations into the "lamentable accident."

Just four of Cubana's own 16 planes are flying, according to a Reuters examination of data on Flightradar24 and Planespotters.net.

Over the past month, the airline announced it was axing several routes mainly used by Cubans and reducing the frequency of flights to Santiago, Holguin and Baracoa, all popular tourist destinations. In a statement, it said it was working to resolve the situation and apologized for the disruption.

"It has lost a lot of prestige. It's already not the famous Cubana that used to fly to all parts of the world," said one former employee, who asked to remain anonymous, who retired 6-1/2 years ago after working for Cubana for 40 years."Anywhere else in the world, a company like Cubana would have folded."

Cubana said in mid-June it did not have enough aircraft largely because of maintenance issues and lack of parts, which aviation experts say can cost millions of dollars.

The airline sells tickets to Cuban citizens at heavily subsidized prices. Its budget is also stretched by ferrying official delegations around sometimes at a financial loss, a former Cuban diplomat familiar with Cubana operations said.

Cash-strapped Cuba points the finger at the 56-year-old U.S. trade embargo, saying it has cost its flagship carrier millions of dollars.

The coup de grace was possibly the purchase of six An-158 regional jets from Ukrainian manufacturer Antonov since 2013.

Cubana has said those planes have had technical problems and getting parts for the joint Russian-Ukrainian project has proven difficult since Russia's annexation of Crimea in 2014.

An Antonov representative told Reuters Cubana had not been paying for the necessary work but it had signed a deal in April with the airline to cooperate "to resume the use of AN-158 planes before the end of the current year."Typically, airlines lease planes when theirs are undergoing maintenance or there is a spike in demand, but the U.S. embargo and financial constraints likely complicate this for Cuba, said Richard Aboulafia, vice president of U.S. aviation consulting company the Teal Group.In May, Lithuanian lessor Avion Express and Italian lessor Blue Panorama both ended their contracts with Cubana, the companies told Reuters, without explaining why. Data from Flightradar24 shows they withdrew respectively four Airbus A320s and one Boeing 737. That is around the time when Cubana turned to the little-known Damojh, leasing the 39-year-old Boeing 737.

Damojh has faced safety concerns in other countries in the region. Guyana's aviation authority told Reuters it had revoked Damojh's permit to fly there last year due to issues such as overloading planes. The airline declined to comment on the matter.

The crash in May has undermined trust in Cubana."I like to travel by plane.It'ster and more comfortable," said Maylín López, 48, waiting at Havana's bus station for her 15-hour ride to eastern Cuba. "But I can't even imagine doing that now."


(Sarah Marsh and Nelson Acosta - Reuters)
Posted by Michael Carter at 10:20 AM