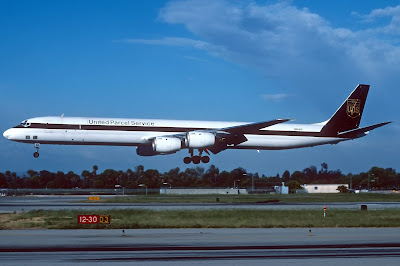 It was always so fantastic to see the UPS DC-8-73CF's come home to Long Beach Airport (LGB/KLGB) every afternoon back in the 90's! This fine example is seen in April 1998 on short final to Rwy 30 the same Rwy she returned to following her first flight back in November 1969 as she would have departed from Rwy 12 on her departure.

She was delivered to Trans International Airlines as N486FT on December 29, 1969 as a DC-8-63CF. In the following years she flew with the following:

Spirit of America Airlines as N486FT

and finally United Parcel Service (UPS) as N814UP until her retirement in 2009 when she was placed into storage at Roswell (ROW/KROW), New Mexico and later scrapped.
Posted by Michael Carter at 8:53 PM