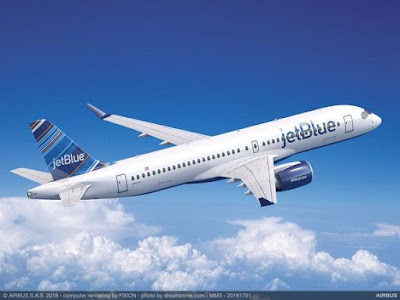 Back in July, Airbus signed tentative deals to sell a large number of A220s to jetBlue Airways and a proposed U.S. airline start-up led by JetBlue founder David Neeleman. Yet by the end of November, those deals still hadn't been included in Airbus' official order book.

Both orders were firmed up right at the end of 2018. That will boost Airbus' A220 order backlog by more than 30% -- and an even greater percentage, if you exclude existing orders that are likely to be canceled. However, to make the A220 program a financial success, Airbus will need to build on the program's momentum and capture more orders outside of the U.S. market.

At the beginning of July 2018, Airbus took over management of Bombardier's struggling CSeries aircraft program and also gained a majority stake in the program. It promptly renamed the CS100 and CS300 the A220-100 and A220-300, respectively.

It didn't take long for Airbus to start landing orders for its new aircraft family. Within a few weeks of the transfer of control, jetBlue announced that it would buy 60 A220-300s, and Moxy Airways (the code name for Neeleman's start-up) also decided to acquire 60 A220-300s.

Last week, Airbus announced that both airlines had firmed up their orders in the final week of December. This adds 120 firm orders to what was a relatively thin backlog of 353 firm orders as of the end of November. It also gets Airbus to at least 600 firm orders across all of its aircraft programs for 2018 as a whole -- excluding any possible cancellations booked last month.

Both jetBlue and Moxy Airways executives have high hopes for the A220. jetBlue says that its A220-300s will be 29% cheaper to operate on a per-seat basis than the Embraer E190s they will replace. The A220-300s also have enough range to operate transcontinental flights -- unlike the E190s -- allowing for higher utilization. An A220-300 could even theoretically fly from Boston to Iceland, Ireland, or Scotland.

Considering all of the benefits of the A220-300, jetBlue expects its fleet replacement campaign to boost its companywide pre-tax margin by about 3 percentage points and increase its pre-tax profit by hundreds of millions of dollars annually.

Meanwhile, Neeleman believes that the A220's low operating costs and substantial range will allow Moxy to profitably serve a slew of markets that lack nonstop service today. In fact, he has said that his new start-up may not face direct competition on any of its routes. Neeleman is confident that cheap nonstop flights will allow Moxy to quickly become a force in smaller U.S. markets.

These two sizable A220 orders are certainly nice for Airbus to have. However, in order to avoid potential legal action related to government subsidies for the CSeries/A220 program, Airbus has decided to build A220s destined for U.S. airlines at a new facility within the United States.

Between an earlier order from Delta Air Lines and these two orders, the new assembly line's capacity is almost fully booked through 2024 at a production rate of up to four aircraft per month. By contrast, the original Mirabel, Quebec, factory could theoretically build up to 120 A220s annually -- but there are barely more than 200 unfilled orders from customers outside the U.S. Thus, as things stand now, Airbus would be building A220s at low production rates in two separate facilities. That's an inefficient way of doing business.

For the A220 program to reach a respectable level of profitability, Airbus needs to achieve a production rate in Mirabel roughly in line with that factory's capacity. To do so, it would need to secure hundreds of additional firm orders from customers outside the U.S. in the next few years.

The jetBlue and Moxy orders should give potential buyers more confidence that the A220 program has a long-term future. Now Airbus needs to follow through by recruiting new A220 customers so it can fully utilize its existing production capacity in Mirabel.

(Adam Levine-Weinberg - The Motley Fool)
Posted by Michael Carter at 6:53 AM