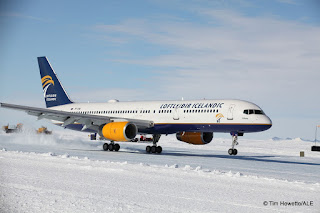 In this age of modern air travel, it is relatively easy for anyone with the means to book a flight to almost any corner of the Earth.

Unless that corner is Antarctica, a place where you cannot simply pave a runway and start landing planes.

In Antarctic locations such as Union Glacier, the runway is blue ice: dense, intensely blue glacier ice formed when snow falls onto glaciers, gets compacted and recrystallizes. This is generally a place for cargo and military jets, such as the Russian Ilyushin.

But commercial jets are making progress — and the Icelandic airline Loftleidir landed the first Boeing 757 on the blue ice runway at Union Glacier on Thursday.

The flight "was undertaken to prove the feasibility of landing commercial passenger airliners at Union Glacier," the airline said.

Antarctic Logistics & Expeditions (ALE), Loftleidir Icelandic and NAS Corporation Limited had been working toward the landing for seven months. 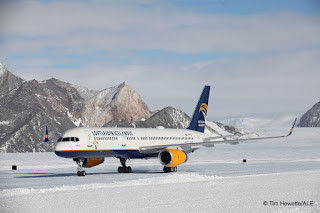 "ALE is researching the potential for utilizing conventional passenger airliners in addition to passenger/cargo combination aircraft," according to a blog post from ALE subsidiary Adventure Network International.

"The Boeing 757-200 ER, fitted with 62 business class seats, will enhance passenger comfort yet maintain the safety of ALE’s activities and aircraft resources."

"By extending the range of aircraft that can be used to support visitors and scientific research, ALE has expanded its evacuation capabilities, further ensuring safe and environmentally responsible operations," the company said in a statement.

While a milestone, the Boeing 757 landing was not the first commercial jet to land in Antarctica (though it was the first at Union Glacier, , according to Leeham News and Comment).

In 2008, an Australian group flew a commercial Airbus A319 from Hobart to the research station of Casey, Antarctica.